« Is Selling an Art or a Science? | Main | When Sales Leaders Don’t Change, CEOs Change Management »

Do You See Mountains as Obstacles or a Stage Set for Excellence?

Last month I went hiking in the Canadian Rockies. It was a thrilling experience to walk above the glaciers on narrow ledges that are secured by steel cables and finally sit at the top and look at the small world below. 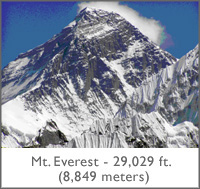 When I returned, I noticed a book in my office written by the Italian mountaineer Reinhold Messner, who lives in South Tyrol (where the majority of people speak German). Reinhold Messner has climbed more than 3,500 mountains. He crossed Antarctica on skis and crossed over 1,000 miles through the Gobi desert. He wrote dozens of books about his adventures. Messner was the first human being to set foot on 100 unexplored summits. He climbed Mount Everest solo, without oxygen, and mastered 14 of the tallest mountains in the world, all more than 8,000 meters tall (26,247 feet). Messner describes mountain climbing as a stage set for excellence.

“To me, mountains are places that offer opportunities for performance; they should be a natural theater where I can express all my skills, my craft and my instincts.”

Note: Replace the word “mountains” with the word “obstacles” and ponder the new meaning.

When Messner started in 1972, it took him a whole year to raise funds to finance his first expedition to the Himalayas. When he got back he sold his pictures, films, and ideas for better equipment to pay off his debts and then started to raise funds for his next venture. Nine months of fundraising and three months of climbing mountains did not appear an efficient use of his time. Messner soon shifted the paradigm and made plans to conquer tall mountains with smaller teams, less equipment, and without oxygen. This strategy reduced the cost of his expedition and increased his chances for reaching the summit earlier. Many people thought that Messner was insane. But the new plan worked. The following year he conquered two 8,000-meter mountains in one expedition – a feat nobody had ever achieved before. Messner explains his methodology for conquering the limits of the human mind in his book All Fourteen 8000ers:

“The limit at any given time is really only a taboo which can be shifted, so that we slowly move toward what is absolutely impossible, something nobody can reach, but which is the magic point that keeps adventure and uncertainty alive. Gradually, I learned, through expeditions to the 8,000-meter peaks, just how much more it is possible to do, and how to do it better.”

Messner believes that preparation and vigilance can turn potential disaster into survival and recovery. He says, “I have always known that something could go wrong, but at the same time I have prepared myself for conceivable dangers and planned in detail what to do in such circumstances.”

In the book All Fourteen 8000ers he describes how he managed a narrow escape: “High above us, a rock as big as a dinner table broke loose. I watched it fall down the face. First it slid, and then it jumped through the air in several bounds, past my partner and directly toward me. I stared as if hypnotized, all the while hanging trapped on the rope, unable to free myself. Like a frog staring at a snake, I waited until the very last moment when the stone was right above my head, then, with a tremendous jolt, I tore myself to one side. The boulder whizzed a few inches away from me, hurtling thousands of feet downward, disappearing in the great glacier basis at the foot of the face.”

After the moment of high anxiety subsided, Messner says he reasoned, “I knew that my only chance of survival was to wait until the last moment to be able to dodge it accurately. The trajectory of a falling stone can only be read in those final moments.”

On Failure After Success

People who reach a high level of success tend to believe that they are special, they have the golden touch, and they can do anything. In business, these self-delusions can turn into financial disasters. Mountain climbers are not exempt from these risky thought patterns. Messner has studied the successes and failures of many climbers who have gone before him. He found that far fewer accidents happen on the way to the summit than on the way down. Messner reasons, “Curiosity is the driving force on the way up. Climbers often forget that most of the accidents on 8,000-meter peaks occur on the way down. The body is tired from the strenuous ascent, the curiosity of the summit is gone and the danger of falling is infinitely greater.”

Messner sees the summit as a part of a continuum. He believes in going the full distance slowly and steadily, bit by bit: “If you go too fast and try to leapfrog stages, sooner or later you will stumble.”

On Surviving in the Death Zone

Blind ambition sometimes drives out critical thinking, and one small error in judgment can lead to fatal consequences. Some people believe that a record-breaking achievement for mankind justifies the risk of losing one’s life. During the last 50 years, hundreds of mountain climbers have died trying to climb Mt. Everest. Many climbers talk about the “death zone,” the region above 8,000 meters where every breath turns into a strenuous task akin to sucking the air out of a bottle. Friedl Mutschlechner, a fellow climber on Messner’s team, once wrote, “In this zone, death becomes a tangible option. The mind tells you that dying would not be that bad. The temptation to take that tiny step toward eternal sleep is enormous.”

Good climbers develop a meditative ability that allows them to endure adversity at great altitude. Meditation helps them to slow down vital functions during a storm to allow their bodies to survive until the storm passes. One thing they know for certain: There is no access to the summit without stepping into the death zone.

On Reaching the Summit Within

Reinhold Messner believes that without inner struggle, there is no victory. He writes, “In the final analysis, every expedition to an eight-thousander involves a struggle with oneself. Any inner insight gained is infinitely more valuable than the view from the summit.

"Climbing is first and foremost an inner quest. It is not an external struggle, not a battle against ice-covered rock, not a competition with other climbers, but an attempt to put something I have carefully conceived in my mind into action. The greatest adventure does not take place in your head; the head is the place where it only begins.”

Over the past 25 years, Messner has become a world-renowned writer, lecturer, and business leader. Anyone who meets him walks away impressed with his formidable willpower. A journalist once described it as a “razor-sharp will that is able to transform his body into a goal-seeking arrow, capable of reaching any summit.”

Posted at 09:55 AM in Leadership , Motivation & Incentives, Success | Permalink